It’s a fever.. of xenophobia:

An army of foreign mammals, birds and amphibians is poised to invade Britain – changing the countryside and threatening our best-loved native wildlife, scientists warn.

They have identified 84 exotic species – from the raccoon to the snapping turtle – which could become established within the next few decades.

Some, like the leopard cat, could escape from zoos or private collections, while others, such as the eagle owl, are already living in isolated pockets of the countryside.

from the “Raccoons and Snapping Turtle Join  the Foreign Threat to our Native Wildlife,” Daily Mail, May 2009 the operative word is could…

I’ve been intermittently reading Deep North, the document produced by Transmediale 2009, an annual festival held in Berlin that weaves  media, social change and a thematic issue. This year was loosely Climate Change/Social Change (my piece The Poster Children was in the exhibition).
The book contains an essay by Hilary Koob-Sassen called “Faith in Infrastructure, An Errorist Manifesto.” In this he states that
“Elaboration moves along when structures subside from direct experience to a position of foundational relevance. The aqueducts have disappeared- we have faith in subterranean pipes. Upon this faith we buy a house. Upon this faith we live in New Orleans. An evil experience is the same for the living and the built: the floods were outside of that range of reality to which the structure could respond. The levee breaks and no hidden capacity reveals itself: no preternatural burst of adrenaline allows the slipping deer to spring to a foothold, no particularly well-fashioned piece of levee exceeds its nominal strength and endures. No response. These two syntaxes- genetic and materialist- must name reality faster than it changes. Otherwise, reality deletes them.”

I went to a talk at Parsons today on Land Art, presented by Incubo (Chile) and  Land Arts of the American West (Texas).
The 2 groups worked on this, Earthworks Lab.

Land Arts of the American West is “an interdisciplinary field program expanding the definition of land art through direct experience with the full range of human interventions in the landscape, from the inscriptions of pictographs and petrogylphs to the construction of roads, dwellings, and monuments, as well as traces of those actions. Land art includes gestures both small and grand, directing our attention from potsherd, cigarette butt, and mark in the sand to human settlements, monumental artworks, and military/industrial projects such as hydroelectric dams and decommissioned airfields.”

One of Incubo’s projects is Nomade, taking a 4wd bus out into remote landscapes. First foray for artists and designers went to the Atacama Desert, engaging in  fog-catching, speculative interventions, and inquiring into recent post-industrial landscapes.

(Tapping fog or fog harvesting has  successful in many  localized instances.)

New geological ages are characterized by changes in global environmental conditions and large scale shifts in types of species. Recently Earth has entered into a new geological age: The Anthropocene, from anthropo / man and cene / new [geological age]. Humans are now changing the world on a global scale and ushering in the new era in geologic time.
– Oceanography in the 21st Century

It has no precise start date, but may be considered to start in the late 18th century when the activities of humans first began to have a significant global impact on the Earth’s climate and ecosystems. This date coincides with James Watt‘s invention of the steam engine in 1784. The term was coined in 2000 by the Nobel Prize winning atmospheric chemist Paul Crutzen, (who unpacked the process of atmospheric ozone depletion) who regards the influence of human behavior on the Earth in recent centuries as so significant as to constitute a new geological era.
– Wikipedia

Geologists from the University of Leicester propose that humankind has so altered the Earth that it has brought about an end to one epoch of Earth’s history and marked the start of a new epoch – the Anthropocene.
They have identified human impact through phenomena such as:

The scientists analysed a proposal made by Nobel Prize-winning chemist Paul Crutzen in 2002. He suggested the Earth had left the Holocene and started the Anthropocene era because of the global environmental effects of increased human population and economic development. 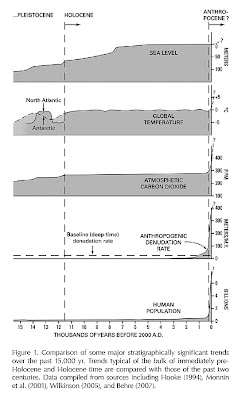 The researchers argue that the dominance of humans has so physically changed Earth that there is increasingly less justification for linking pre- and post-industrialized Earth within the same epoch – the Holocene.
– from Paleoblog